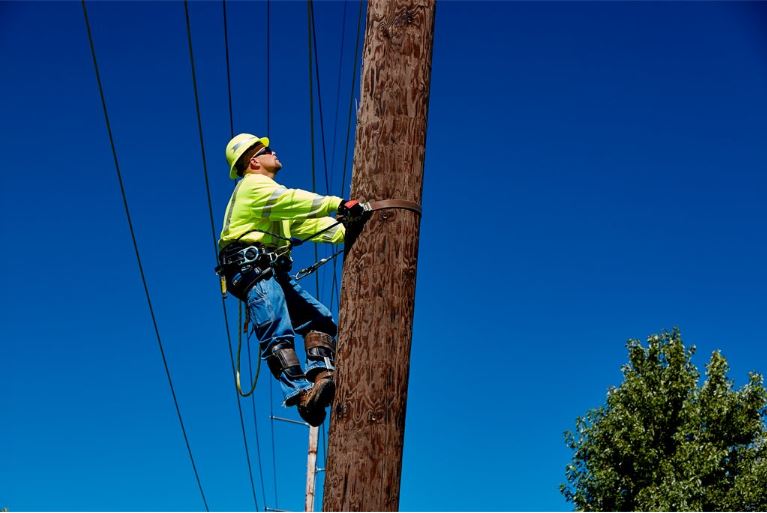 The history of the linework industry

Linework became widespread in the 1840s with the increased use of the telegraph. The term “lineman” was used for lineworkers who set wooden poles into the ground and strung the wire. In fact, that’s still what happens today to power electrical grids. This is dangerous, technical work where safety is paramount not just because linemen work at heights, but because electrical power carries with it the risk of electrocution.

Lineworkers consider this line of work to be not just a job, but a lifestyle. The men and women who take up this type of skilled labour know it is a conscious choice to work in this extremely dangerous industry. There is a strong sense of community between lineworkers because so much is literally “on the line”. They belong to trade unions and other membership groups that celebrate this profession for its commitment to hard work and specialized training needed to complete the job properly, despite all of the risks associated with it.

Lineworkers are known for being extremely competitive. They often participate in linemen rodeos, where teams demonstrate their skills during timed events, like how quickly one can ascend or descend the wood poles. In Canada, there are many lineman rodeos that take place across the country each year.

People considering a lineman career will typically complete one year of schooling followed by a four-year apprenticeship to become a journeymen lineman. Training centers where education begins can be technical schools or community colleges and universities where courses are offered. There has been significant growth in the number of new training centers in North America and the instructors are often former lineworkers. It is critical that experienced lineworkers share their best practices to prepare the new workforce for life on the line. These experienced workers are the key to success when it comes to new hires because of their skill, expertise and institutional knowledge that they can share with new trainees and apprentices.

Today, linework is still considered a dangerous job in Canada. That’s because this kind of utility job exposes workers to all types of hazards, including:

The increased need for lineworkers is the result of a growing population and the increased use of electricity consuming devices such as smartphones and smart home devices. Electric vehicles also contribute to this increase – by 2040, it’s expected that electric cars will account for approximately 5% of the electricity used in the United States and will account for more than half of new cars being sold.

Natural disasters play another large role in how much lineworkers are needed. As the number of lines increase due to demand for more electrical power, so does the impact of frequent and severe weather hazards that have the potential to damage these important power lines.

Restoring utilities is a priority after natural disasters because cleanup work and daily needs require access to power. Severe weather is a major factor in many power outages, costing the economy in lost output and wages, spoiled inventory, delayed production and damage to grid infrastructure. Lineworkers are a critical first line of recovery needed to support cleanup efforts after storms, ice storms, flooding, high winds and more.

Why safety needs to be a priority for lineworkers

Due to the dangerous nature of this work, those that do choose to be part of this unique industry need to be assured that they will be kept safe. They must have access to qualified training and quality fall protection products and other personal protective equipment (PPE) to help keep them safe while on the job.

As a new worker, it is especially crucial to be outfitted with the proper PPE in order to safely perform this dangerous job. This includes the right safety harnesses, safety lines and fall protection for tools accessories such as buckets and hooks.

For more information about the PPE available specifically for lineworkers, reach out to us using the below form.

Bloomberg. “The Power Consumed by Electric Vehicles Is About to Surge 300-Fold.”  https://www.bloomberg.com/news/articles/2017-07-06/electric-cars-are-about-to-boost-global-power-demand-300-fold